Colors bear their own code of associations, conjuring certain perceptions in our minds and triggering a physiological reaction. One can argue that the way we wear certain colors is similar to the way writers use poetic devices – to represent emotions, sensations, and ideas that are otherwise hidden in our subconsciousness.

As we readily follow an agreeable object that flies from us, so we love to contemplate blue, not because it advances to us, but because it draws us after it.
– Goethe

Blue is largely considered to be the most mysterious and deep of all colors; a synthesis of the heavens and of the abyss. Turquoise, aquamarine, ultramarine, cobalt, azurite, classic blue (the 2020 Pantone color of the year), royal navy… blue is undoubtedly one of the richest when it comes to shades and hues, which also explains its nuanced symbolism. Wearing blue, therefore, can indicate a wide palate of perceptions: from seductive to tranquil, to romantic, to confident, to introspective, to dark – blue encompasses such a wide array of emotions and meaning (there is a reason why we sometimes feel blue, which is also where the name of the music genre the blues originates).

Below are our favorite representations of blue, beautifully exhibited by Argent’s diva Mila Belcheva. 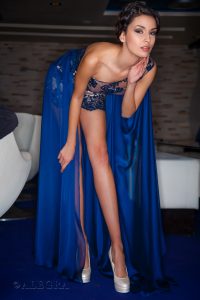 Blue is Confident and Sexy

From a psychological perspective, blue is mainly associated with confidence and positive assurance. In the world of business, blue is encoded into the brand identities of giants like Microsoft, Facebook, Samsung, Amazon, Ford, PayPal, IBM, and LinkedIn (among many others). The reason for such predominance is the feeling of trust and confidence this color evokes (think in terms of sailor uniforms in the navy, which triggers a feeling of reliability and trust). Per the philosophy of Hinduism, blue is the color of the throat chakra, known in Sanskrit as Vishuddha. Wearing blue stimulates the Vishuddha, allowing one to express oneself with ease and poise. And, if we agree with Dr. Frasier Crane (of “Cheers” and “Frasier” fame) that “there’s no greater aphrodisiac than confidence,” what could be sexier than a woman who knows how to express herself!

The game is on, ladies! 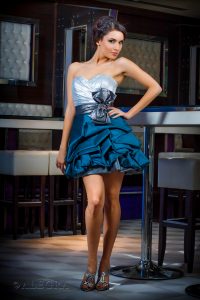 Blue is Desired, Distant, and Elusive

Think of the eternal Blaue Blume (Blue Flower), the ultimate symbol of unreachable desire and beauty in the age of Romanticism; an embodiment of metaphysical longing for the immeasurable and distant. From the novels of German romanticist Novalis (1772-1801) to the poetry of Russian symbolist Alexander Blok (1880-1921), and considering as well G.R.R. Martin’s now cult series “A Song of Ice and Fire” (it is the blue winter roses that Rhaegar Targaryen uses to scandalously crown Lady Lyanna Stark as the Queen of Love and Beauty over his own wife), the blue flower calls for love, while completely absorbing one’s senses, remaining distant and elusive. 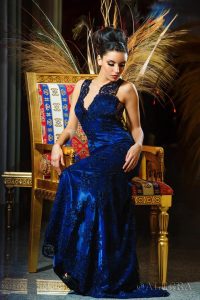 Blue is Divine and Tranquil

Outside the realm of romance and seduction, since ancient times blue has represented the divine and tranquil. Considering Hinduism, again, blue is the color of Krishna, the supreme Hindu deity. In China blue epitomizes healing and immortality. In ancient Egypt, blue was the color of the gods and the royal stone Lapis Lazuli was assumed to contain divine properties (it was this gemstone that Egyptians believed would lead the soul of the deceased to the afterlife). Fast forward to the 15th century, iconography from that period forward depicted the Virgin Mary in a blue cloak, a symbol of her divine nature. Today blue is linked to spirituality and spiritual contemplation and is often worn by those who wish to highlight their mystical allure.

Read the full article in the 2018 Summer issue of Falchion Pub.