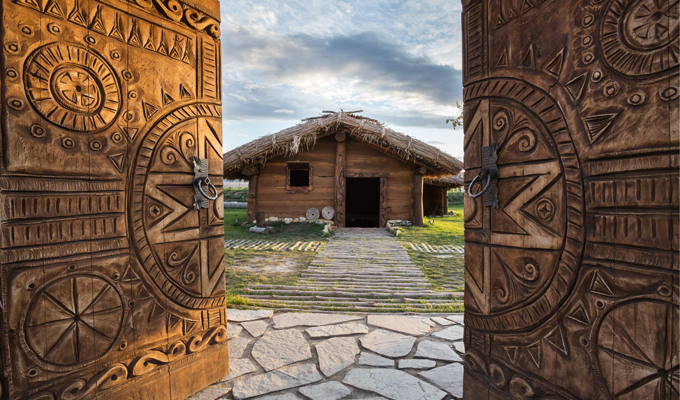 Over a two day period Argent Pub was fortunate enough to gain exclusive access to Historical Park in Varna, a complex conceived—both in terms of its construction and its philosophical foundation—on an immense scale.

When we arrived it was still light. As one approaches the entrance, there is immediately the sense that one is crossing over a threshold. Between the giant Thracian archer aiming his arrow at the skies, and the massive medieval fortress that serves as the center for welcoming visitors, there is no denying that one has entered the grand tapestry of Bulgaria’s history.

Earlier we had met Rosen—our guide and representative of Historical Park and all its creators are trying to achieve. Rosen is soft spoken, but there is an underlying determination that is palpable when he talks about the project. A fierce commitment to the cause, so to speak. “Unlike other contemporary cultures,” Rosen explains to us, “the Thracians believed that one could control one’s own fate — that one’s life was not pre-determined by the Gods. Therefore, archers would fire their arrows at the sky during a thunderstorm in defiance of Zeus.” 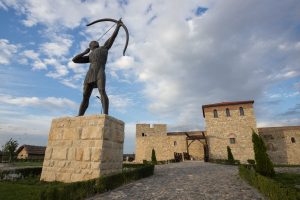 I could not help noting the size of the statue — which makes for a bold statement. I felt that it was a strong indication that Historical Park’s creators also have a certain destiny in mind. Truly, they are shooting for the stars.

Past the monument of the archer, the medieval fortress is no less grandiose. Replete with a moat and drawbridge, the enormity of the entrance alone made me feel as if I had achieved something, simply by the entering. But even amidst the archaic grandeur of the medieval fortress, there is a feeling of modernity inside. Rows of computers for processing electronic payments, flat screens hanging on the walls, collections of souvenirs on display—all indications that no expense has been spared to provide visitors with a cutting edge, sophisticated experience.

As I strolled about inside, I caught a glimpse of an ominous portcullis, whereupon I couldn’t resist retreating to a fantasy where throngs of warriors clashed in a ferocious attempt to defend the castle from would-be invaders.

Since I was a child, I have always been fascinated with the ancient world. With kings and rulers, swords and battles. Perhaps because of this, Historical Park, and Bulgaria in general, is a bit of a slice of heaven for me. Everywhere I go, I imagine there might be a Thracian tomb right around the corner (or perhaps below my very feet), and I cannot help but think of what treasures might lie in wait within. It’s enough to give this ol’ Texas traveler the shiver me timbers. But I digress…

With the initial threshold passed (As we were to find out, there would be many thresholds crossed during the course of our tour), we were ushered through the fortress complex and out into the park grounds. We had come to another world.

Throngs of people were milling about, taking the attractions in as they attempted to find their guide for the day. A young girl wearing a green Historical Park t-shirt corralled our particular group, herding us toward a collection of domiciles that represented the Neolithic and chalcolithic era. People darted in and out of the dwellings, looking at the life size figures inside. 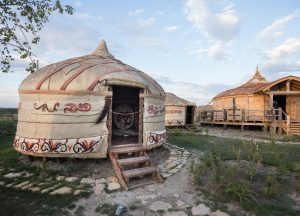 When one makes one’s way through the park, one key word is of paramount importance: authenticity. from the constructions, the entertainment, even the food, everything is made with natural materials and ingredients of a kind that would have been used in ancient times.

Currently the biggest attraction is the Thracian complex, which includes a palace, temple, and tomb. The construction of a fortress dedicated to Bulgaria’s magnificent 2nd kingdom is underway, and scheduled to be finished by 2022.

After the prehistoric exhibits, we were ushered to the Thracian palace, a multistory complex designed to host events alongside showing visitors how the rich and famous of the ancient world would have lived, influenced, and partied amongst themselves.

Time for a quick glass of wine, before being sat in a large hall, where we were to get a front-row seat of the reenactment of an ancient ritual involving brotherhood, and finally a mock battle between a warrior and an Amazon woman.

Back and forth the two fighters went, slashing swords, clashing shields, and thrusting spears, until finally the Thracian prevailed. Afterward, a brief description of what we had just seen, and then we were let loose to explore the palace for ourselves.

I meandered about the various rooms, viewing beautiful artifacts and art.

Everything sang to the rhythm of detail. Details, details, details. The creators have captured everything; from the ostentatious nature of the ancient rulers, to the amalgamation of Persian, Greek, and Scythian influences. It has all there. All too soon, our guide indicated to us that it was time to move on, only we would now be moving from the exciting world of the living — to the afterlife.

Not far from the Thracian palace, a great mound of earth has been raised, and inside the mound one catches a glimpse of hallowed ground.

Like the tombs found in Kazanlak—the Valley of the Kings—the burial mound replicated at Historical Park consists of a circular burial chamber accessed by a long, narrow corridor. Inside this chamber, visitors are able to catch a glimpse of a bygone prehistoric era while experiencing the awe and majesty Thracians dedicated to the afterlife. From the center of the chamber, a straight shaft shoots upward — a skylight providing direct access to the heavens.

Like many builders of the ancient world, Thracians used megalithic slabs to construct their tombs, some weighing up to sixty tons. And the Thracians were also excellent craftsman, as the tombs at Kazanlak show. Most historians, because for lack of concrete archaeological evidence were forced to take Herodotus and other contemporary Greek historians at their word, believed that Thracians were uncouth barbarians. That is, until many of the artifact-laden tombs began to be excavated in recent years.

The artifacts within the tombs, and even the construction of the tombs themselves, tell a different story. They tell of a level of sophistication that only knowledgeable craftsmen could have achieved.

Dedicated to war and plunder the Thracians may have been, but they also had a layered, complex way of life that had developed over millenia.

Perhaps what attracted me most to the park is its immersive nature. Truly, there is an amazing sense that you are placing yourself into the times and eras represented.

Personally, I feel that there is so much mystery surrounding humanity’s past, and so any effort to portray and replicate fully 10,000 years of history is such a worthy endeavor, and to do it in the exacting, precise way that has been done at Historical Park is an impressive achievement.

And as the potential of the park began to sink in, I thought about the number of potential activities that could be embedded into Historical Park’s over-arcing program. 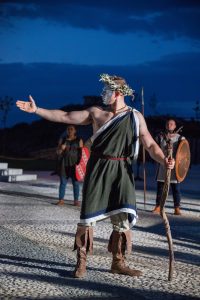 Imagine children having a history lesson in school—say, about the 2nd Bulgarian kingdom, for example—and then allowing those same kids to immerse themselves into a relevant experience first-hand through the participatory activities initiated within the park itself.

This kind of immersive role-play may seem like an exotic idea, but it’s one that is increasingly backed up by a lot of good academic research. Studies strongly indicate that “gamifying” learning through immersive role-play is vital for one’s deeper understanding and advancement in a subject.

As the expert Jennifer Roland notes:
Playing games can signal the release of dopamine in students’ brains when they achieve the goal set out for them, whether they’re playing a learning game or something for fun outside of class. Dopamine is a neurotransmitter that controls the reward and pleasure centers of the brain. This can help students enjoy the game and create long-lasting affinity for the subject matter they’re studying. And it can help them find enjoyment in solving complex problems and seeking out problem-solving activities, even outside of games.

Historical Park provides the opportunity for this type of gamification par excellence.

In a nutshell, Historical Park offers immersion, entertainment, and education all wrapped into one experience. Indeed, each of the sections of the park could easily offer programs that are linked to celebrations and rituals at various times of the year, making one’s desire to return almost inevitable. During the winter, for example, exhibitions and presentations could take place demonstrating how different groups in different eras celebrated or marked the solstice.

When you consider horse riding, coin making, learning how to shoot the bow and arrow, it is easy to see that the potential for immersive activities is virtually limitless. 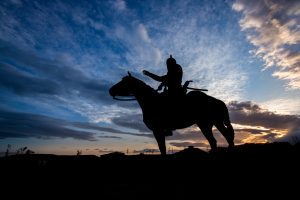 Perhaps one of the most novel things about Historical Park is that it is not confined to the park itself, but rather its philosophical underpinnings extend beyond the confines of the Park’s walls.

As Rosen explained to us — his calm, educated voice hypnotizing and logical — as an organization, they are dedicated to living a different way of life; a way of life that eschews obsessive scrolling in social media, preferring instead an intimate link to the beneficial aspects of the ancient world. “People back then,” explains Rosen again, “knew how to live. They lived for every moment, because they knew they had perhaps 35-40 years, total, on earth. Now, we have much longer life spans, but we don’t know how to properly live.” There was a heavy emphasis on the word live.

A short distance from Historical Park, in the small town of Neioffit-Rilsky, there are a number of homes being constructed in the ancient style of the 2nd Bulgarian kingdom. These architectural marvels sit on sizable plots of land, many of them adjacent to modest village houses and farmers (who, I imagine, must be somewhat puzzled by the small but elite group of young professionals moving in and developing the area).

There is an underlying sense that the reason for constructing Historical Park, coupled with the housing development, is to change the way people think about themselves and their past, to allow Bulgarians and Bulgarian culture to once more come onto the world scene as leaders, if not in a geopolitical sense, but from the standpoint of cultural heritage and lifestyle.

These ideas, I have to say, really hit home with me.

We talk of progress today when speaking about our infrastructure, architecture, culture, and most importantly our mentality.

But there are so many beneficial things from the ancient eras that have been lost to us.

Their homes and buildings, for instance, were designed to stand the test of time. Buildings and structures these days are no longer made this way. Even in the last one hundred years, we seem to have largely lost the ability to construct with a purpose and a sense of heritage; of lasting significance on a scale such as the Thracians.

I don’t think I am going too far in suggesting that something has been lost. Something associated with aesthetics, an eye for objective beauty. We have, in effect, in so many instances, traded localized, traditional beauty for global utility.

But life, as the creators of Historical Park in Bulgaria would say, is meant to be lived beautifully and bravely.

Historical Park is more than just a pleasant place to while away the afternoon. More than a place to simply take your kids to play. Rather — it is a place, at its very foundation, dedicated to education and revival.

Ultimately, the message that the creators of Historical Park wish to impart is that the past has value; value not only from an academic or historical perspective, but true value in its ability to transform the way we live our lives today. And it is decidedly this message that is at the heart of the experience. That there was life. That every aspect of our being has meaning, from what we eat to where we live, and to the principles we live for.